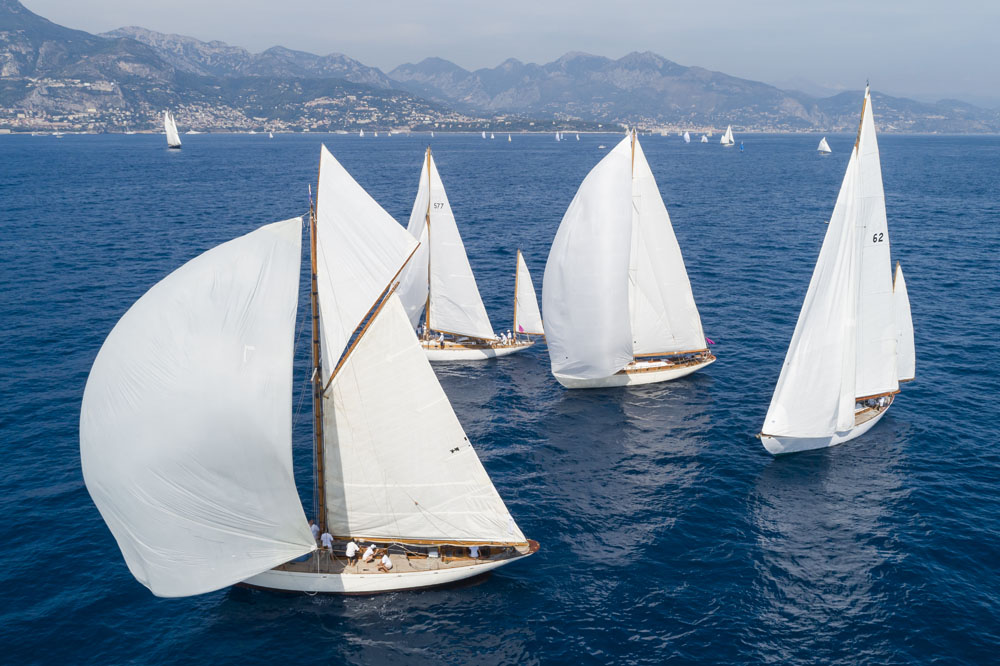 A biennial event organised by the Yacht Club de Monaco since 1994, it is a stunning celebration of the yachting lifestyle that dates back over generations, putting the spotlight on gleaming hulls and beautiful boats, be they sailing or motor. It is not just about competition, but naval etiquette done with panache by the Club in partnership with Rolex and Credit Suisse. The Monaco Classic Week Trophy, awarded to the most elegant and best restored yacht, this year went to the majestic Puritan (1930), with the 2019 La Belle Classe Restoration Prize presented to the miraculous Swedish gaff Ester back from the dead after 75 years 52m down on the seabed.

More than 100 classic yachts, including seven of the big schooners from the International Schooner Association were in the YCM Marina. Some 800 sailors, owners and skippers from 26 countries put on a show reviving a bygone era, with the focus on America and the glory years when American sailing and motor boats dominated the seas for speed. All promise to return for the next edition from 15-19 September 2021.

The focus was on America and the glory years of the last century when American sailing and also motorboats dominated the seas thanks to big names like Nathanael Herreshoff and John Alden, not to mention the iconic motorboats of Chris Craft. Also present, were yacht clubs steeped in history, like the Manhattan Yacht Club invited to sail on French Kiss, as a nod to its winning yacht in the 1987 America’s Cup, and the Nantucket Yacht Club whose members were on Comet (1946). An extra special guest in keeping with the theme was the SS Delphine, the largest steam-boat still sailing, built by the Dodge family, whose elegance and authenticity were admired by all her passed by.

Among newcomers to Monaco Classic Week: Atlantic (66m), the famous New York Yacht Club schooner which in 1905 set the record for an Atlantic crossing of 12 days 4 hours 1 minute 19 seconds. It was not until 1st August 1980 that a Eric Tabarly beat that time on this 2,925 mile course The impressive John Alden design schooner Puritan (1930) was the big winner of Monaco Classic Week, taking account of the deliberations from the Elegance and La Belle Classe Restoration juries, and succeeds Viola, the 1908 Fife design which won the 2017 edition. The purity of her lines and balanced volumes, combined with meticulous maintenance of a sailing yacht faithful to the original, won over the Elegance jury led by HRH Princess Beatriz de Orleans-Bourbon, supported by among others HRH Princess Camilla de Bourbon des Deux Siciles, the marine painter Marc Berthier and yachting experts and historians.

It will be no surprise to many to hear that the pretty Swedish gaff cutter Ester won the La Belle Classe Restoration prize given the attention to detail paid to her restoration and incredible history.

It was in 1901 that Gunnar Hellgren was given the task to design a sailing yacht capable of winning the Tivoli Cup. The result was an innovative yet supremely elegant boat which for a decade dominated the podiums, hailed by many as the most beautiful sailing yacht in the world. Ester disappeared off the radar after 1915 not reappearing until 1935. She shone again in Ulvoen in 1937, before a fire broke out on board at the end of 1937. Seriously damaged, she was being towed to Ornskoldsvik when she sank off Normanön. It was not until 2012 that another Swede, Per Hellgren, finally managed to locate the wreck using sonar. She was raised in 2016 which marked the start of an incredible restoration story, the results of which were admired by all.

“Back in 2012 I was thinking how thrilling it would be to bring Ester to Monaco Classic Week. Seven years later that dream became a reality,” said an emotional Bo Ericsson, one of the boat’s owners at the prize-giving. “We put together the cream of international technicians, for the hull, frames, rigging, sails, etc. Of course, much of the boat has been rebuilt with Swedish pine and spruce. But thanks to the very accurate documents we found in Sweden, we were able to follow to the letter the details of the original construction. It has been an amazing adventure. The end result has exceeded even our craziest expectations.”

The Elegance Prize for motorboats was awarded to Miss Nancy while the gaff cutter Oriole (1905) designed by Herreshoff was the winner in the sailing yachts category. The Jury Special Prize this year went to the Mylne-design Bermudian yawl Mariella (1938), as they were totally won over by the personality and passion of its owner Carlo Falcone. The International 12-foot Dinghy Class, of which the fleet numbers 400 today, saw a clean sweep by the Italians. Aldo Samele on his Canarino Feroce emerged the winner ahead of compatriots Vito Moschioni (Claudia) and Federico Pilo Pais (Blu Amnesia).

In the vintage gaff group the main rivalry was between the Burgess design Chips (1913) and the Fife cutter Viola (1908), a duel won by Chips, with Viola in 2nd and Oriole in 3rd.

In the vintage Marconi, the Frers design Cippino II belonging to Daniel Sieleki, Vice Commodore at the Yacht Club Punta del Este, Uruguay, emerged the winner. The two Olin Stephens designs, Skylark of 1937 and Blitzen (1938), completed the trio on the podium.

The big schooner Elena of London reigned supreme in the spectacular group of Big Boats, ahead of the Mylne-design Naema and gaff cutter Moonbeam of Fife to win the Magnum Trophy.

The Metric Classes were also putting on a show, with Mecara in the 6M, Mirabella in the 8M and the 15M IR Mariska winning in their respective classes.

It happened at Monaco Classic Week

Franck Cammas, skipper of the Ultim trimaran Gitana 17, was on a stopover in Monaco. “I am naturally aware of boats’ aesthetics. Sailing on these classic boats is magical, but obviously not because of the speed but other sensations, even their very particular smell. When you have a taste for the sea, beauty is important. Technically, when we are hesitating on choices, we opt for the most beautiful, and generally that works out. A lovely boat is a quick boat! And vice-versa a boat that is fast becomes beautiful. Aesthetics are less important today in boat development, but we must never forget our traditions. I’m from Aix originally and I always love coming back to the south. Monaco has a solid regatta tradition, with the Primo Cup which I competed in some time ago.”

Noëlle Duck and William Collier had put together an original exhibition shedding more light on George Lennox Watson, the unlucky Scottish naval architect who lost the Brits four America’s Cup campaigns at the turn of the last century. Eight double-sided panels along the quay in front of the Clubhouse gave a hint of the titanic, sometimes desperate efforts made by this great yacht designer to out-compete his adversaries like the legendary Nathanael Herreshoff and Edward Burgess. Noëlle Duck was given access to the G.L. Watson & Co archives to illustrate this revealing exhibition. It seems industrial espionage was already established, as Watson arranged to get hold of photos to see the hull shapes and volumes of the opponent’s boats while still in the yard.  It was also a treat for yacht enthusiasts to see these shots taken 120 years ago, many of them revealed for the first time. 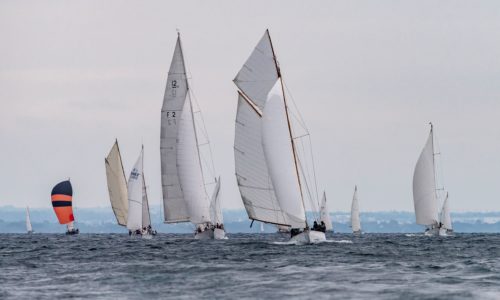 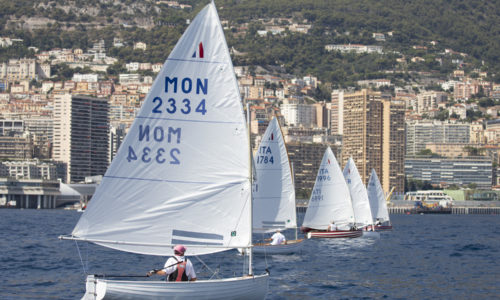 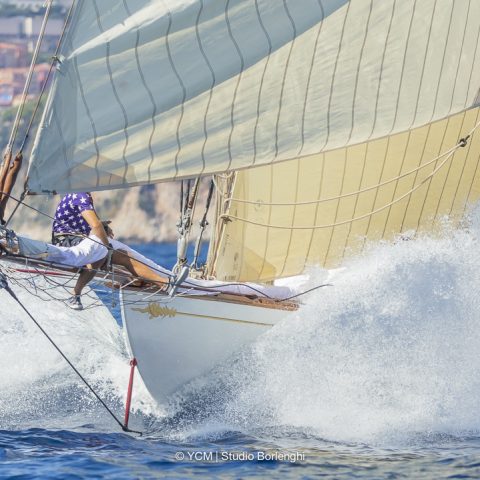 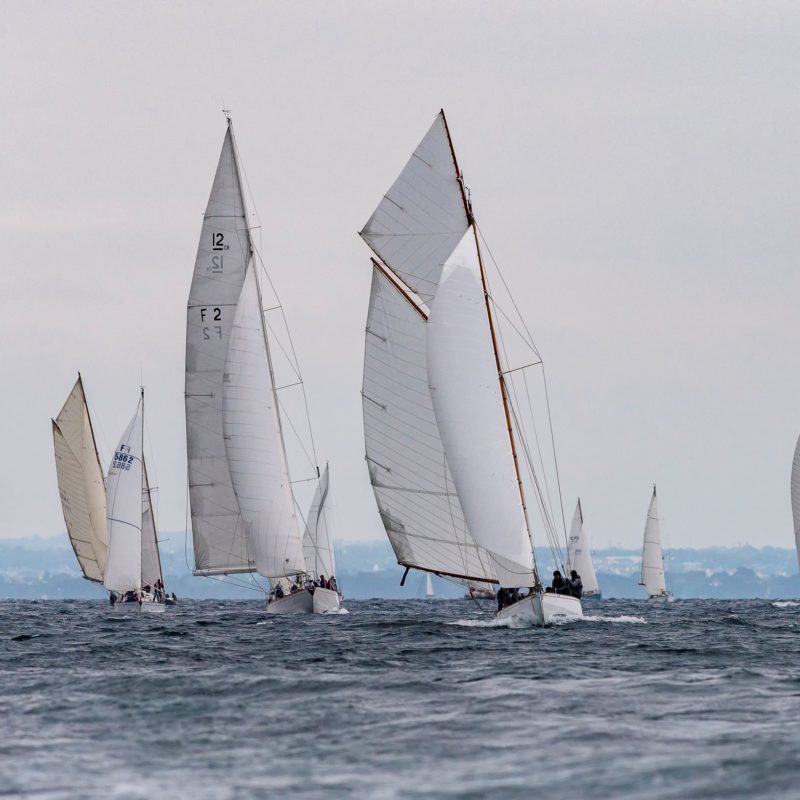